The 5 Stages of Covid Grief

Several clients of mine called, texted or emailed last week to ask - wait for it - how I was holding up with the stock market volatility! How I was doing! I get slightly choked up just thinking about it. Yes, the stock market has been crazy the past few weeks, to use a highly technical term. But, as those calls of concern show, a crisis often brings out the best of people. 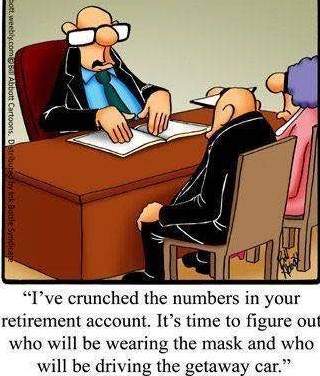 I feel a lot like I did immediately after 9-11. That is, once I got over the shock, I experienced profound sadness. I think that stems mainly from the fact that I live quite comfortably in an ignorant fantasy land that assumes things like this don’t happen in the U.S. We’re Americans, by God!

Intellectually, I know that cholera affects people in the tropics – Asia, Africa, Latin America, India. And, yes, I’ve heard about Ebola and its impact on people in several African countries. But, that’s there, them, someone else I don’t know and never will.

I suspect most of us are actually progressing through the 5 stages of grief: Denial, Anger, Bargaining, Depression, Acceptance. Personally, I think I’ve landed squarely in the Depression stage. Not clinically depressed, just a realization of the inevitable that makes me quite sad. The shock and most of the anger dissipated over having to cancel a trip to London with our daughter for her last college spring break ever. And I bargained and tried to justify going up until the point where her college told students if they traveled abroad during break they would have to quarantine for 14 days before being allowed back on campus. That announcement sharply snapped me to realize this is real and, yes, it will affect me and my family.

There is plenty of evidence around the country that others are in their own different stages. Pictures of crowded bars over the weekend demonstrate that some are still in denial. I’m sure we’ll eventually all move to acceptance and figure out where to go from here but it will take some longer than others.

If the 5 stages can apply to investors collectively, it appears we’re somewhere in the anger and bargaining stages. The financial markets have dropped precipitously and, on the slightest good news, risen sharply again, only to fall again the next day. The Beast rollercoaster at King’s Island pales in comparison to what investors are experiencing.

The U.S. economy is driven largely by consumer spending and, other than toilet paper and way more groceries than we’ll need, that’s a hard stop. Although by definition the statistics won’t show it for a few more months, we’re almost assuredly in a recession now. The question for investors is, what do we do?

As John Bogle, the founder of Vanguard and creator of the first index fund, said when crises come along, “…the best rule you can possibly follow is NOT ‘Don’t stand there, do something’, but ‘Don’t do something, stand there!” What he meant was don’t panic and sell or buy irrationally, stick to your plan. That’s what we’re doing for our clients. Each portfolio is crafted for them and their individual circumstances and, if and when increases and decreases in asset classes like stocks move their portfolio outside acceptable ranges for their plan, we adjust them back into balance. That is not a reaction to the daily market gyrations but instead our effort to keep them on track toward their goals.

Here’s what we know: