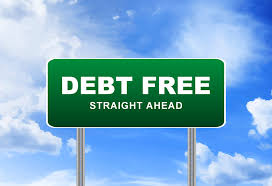 I have a fond memory of my maternal Grandfather sitting me down soon before I graduated from college and telling me, “Steve, whatever you do, don’t borrow money.” While Grandpa John lived far from an easy life as a dairy farmer in Nebraska, he and his mother did inherit the farm when his father died so he didn’t have to incur debt to get started. Circumstances are just different now. Buying a home or even a car is almost impossible without a mortgage or car loan. According to AARP, larger mortgages, higher student loans and a greater overall comfort with debt than displayed by earlier generations has increased the average debt for households approaching retirement by nearly 160% from 1989 to 2010.

Consider Fred and Ethel, both age 45. While they both have good jobs, they have just paid off their student loans and, as a result, are worried they’re a little behind getting started saving for their financial freedom. In addition, when their two children were born they purchased a home and minivan whose payments are stretching their budget. Plus, because their monthly cash flow can be tight, they occasionally build up some expensive credit card debt that takes a few months to pay off. Now, their situation is quite common and really isn’t their fault. Given a choice of incurring student loans or not going to college, they clearly chose the right path for them. So, if Fred and Ethel asked us for advice here is what we would say:

1. Don’t feel guilty, your predicament is not about the past, it’s about the future. Now is the time to plan in order to get where you want.

2. Create a budget that attempts to limit household debt to no more than 36% of gross income – mortgage, car loans, credit card debt. This might not be possible right away but, when the minivan is paid off, keep driving it for a few more years rather than buying a new one.

3. Create an emergency fund by including a regular payment within your budget until you have accumulated the equivalent of about three months of expenses. This will help you avoid incurring ridiculously expensive credit card debt when unexpected expenses pop up.

4. Pay yourself first by making regular contributions, pre-tax if possible, to retirement accounts. Whether it be a workplace retirement plan like a 403(b) or 401(k) or an Individual Retirement Account, include a monthly contribution in your budget. Make the contribution automatic, preferably taken from your paycheck, as you won’t miss what you don’t see in the first place. So, pay for items you want but don’t necessarily need with dollars leftover at the end of the month, rather than leaving retirement contributions for leftover dollars.

5. Not all debt is bad – read here to learn the difference between good and bad debt:  Continue reading