"At Least You Can Serve As a Bad Example"

A good friend says his dad used to tell him when he screwed up that “at least he can serve as a bad example.” In that spirit, someone told me almost four years ago that he had impulsively moved about $250,000 of his retirement account from stock mutual funds to cash because he feared the stock market was about to plummet. Any guesses what happened next? That’s right – the market jumped to new heights. This person then decided to re-enter the market by re-purchasing his stock mutual funds that were now worth much more than when he’d sold. I calculated that his sell-low, buy-high strategy cost him roughly $35,000. 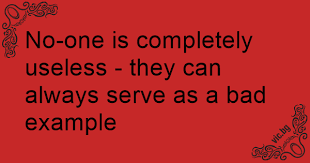 Now, it’s easy to scoff at such moves when we now know the outcome. But it is very easy for any of us to allow our emotions to take over when we fear money we need for retirement is about to disappear. So, lest his mis-step not happen in vain, let’s learn from the last couple decades of stock market results:

Lesson: While the stock market has historically moved higher over the long haul, the increases have often occurred when the market jumped by large amounts on individual days. As our subject now knows, miss those days at your peril.

It’s helpful to picture the stock market as a yo-yo on an escalator – the yo-yo moves up and down incrementally, but eventually moves to the next level. Based on historical performance the stock market will assuredly take a downward plunge sometime in the next couple of years that will leave us feeling queasy, especially if we’re in or near retirement. When that happens, we will all be served well by remembering and learning from the poor experience of our friend from four years ago.